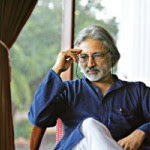 
One of India’s finest directors, he is the soul behind the globally acclaimed ‘documentary’ “War and Peace” which has received too many awards to list here.
The film completely and clinically exposes the global nuclear machinery and is considered to be the most definitive cinematic work on the subject. He is also a noted activist on diverse social and political issues.

Recently, at a screening of the movie in Mumbai, I had the opportunity to seek his views on the current political-social-nuclear debate in India.


Q) The Indian energy scenario is portrayed as extremely grim with over 12 hours of load shedding even in big towns and cities. Nuclear energy is considered to be the answer for providing large scale power at cheap rates.

Energy shortage is a self-fulfilling prophecy. India is blindly imitating all the follies of the developed world without learning from their mistakes and without imitating those few countries, like Germany, that are serious about correcting the mistakes made in the past by turning towards renewable and sustainable energy. There was a time at the dawn of the nuclear age when everyone was in euphoria about the prospects of cheap nuclear energy. America’s ironically named Orwellian program “Atoms for Peace” exported this idea worldwide. In India, people like Dr. Homi Bhabha sold the idea to Nehru and Parliament that nuclear energy would be so cheap that you would not need to meter it!!

That was 60 plus years ago. Today this myth has exploded along with many reactors from Three Mile Island, Chernobyl and Fukushima. The costs of these accidents and the clean up operations literally are too huge to ever measure. But apart from accidents, even in normal conditions, today’s nuclear energy, once reasonable safety measures have been incorporated, is now regarded worldwide to be the single most expensive source of energy available to Man.

So what do we do? The obvious answer is to cut down overall consumption levels – we must NOT build an economy based on the American model of cars, computers, mobiles etc that have to be replaced every year; build express highways that rob our rural population of their precious land while encouraging a consumer class to slaughter itself in the name of speed. Our economic model is a guzzling monster. No amount of energy can satiate it.

Q) As a key infrastructure parameter, electricity is considered as a key to attract investment. Many more projects can be set up if there is assured power. Do you view nuclear energy as a suitable option?

Foreign investment is not the solution, it is the problem itself. If we were a strong economy with enough local investment and local stakes in this economy, we would not be dancing to the tune of every foreign bubble that bursts. So bringing in nukes to attract more foreign investment is like importing the best pistol to shoot one’s own head.

Many view nuclear energy as safe. Industrial accidents are always a risk. But as one official points our in your film, “You need to do a cost benefit analysis.” The safety record of the Indian nuclear energy program is used to justify further investment in building more reactors and that Fukushima was just a ‘Black Swan’ aberration. Your reactions?

Fukushima was a warning that we can ignore at our own peril. The polar icecaps are rapidly melting. Faster than ever before. I just saw a film “Chasing Ice” that gives us visual proof that glaciers are breaking off into the ocean like never before. That means that the sea levels are rising. Nothing can stop this, though radical emission cuts – which are nowhere in sight as yet – may slow it a bit. What this means that the coastlines of countries in the path are in grave danger. Building nuclear reactors in the face of the rising sea is a folly that cannot be comprehended.

Q) The displacement of people, land acquisition and safety of the local population are at stake when any new factory is built. Why is nuclear energy singled out for protests (especially post-Fukushima)?

Displacement is one issue that is common to all lopsided development that favours a tiny elite. Nuclear reactors are much more than that – they are Trojan horses waiting to divulge their malevolence.

Q) There are huge scams happening in each and every deal in India. You dwelled on the defence scandal in your film. Can it be said that because of the linkage between the defence and nuclear energy business, the government is now committed to setting up these reactors in lieu of defence equipment from Russia (MIG, Sukhoi) and France (Mirage) and spares?

Corruption and money are always at the heart of everything and nuclear energy is no exception. Because it is directly linked to defence, it enjoys complete secrecy – ideal for those who make money from coffins.

Q) The Nuclear Liability Bill is considered to be an abject sell out to the US and West. What needs to be done? Despite protests in Parliament last time, the Bill was pushed through. Your thoughts on what can be done now?

People power as witnessed in Kudankulam and Jaitapur. No one else is interested till the chickens come home to roost.

Q) The mainstream media has an unspoken ban on reporting news about nuclear energy in India – except where the news is positive. PTI or NPCIL press releases are covered as “news.” Print and Television are mass media and their exclusion of news means the government or the vested industry has gagged the media. Your views on the way forward?

We live in a dark age and the light we see is artificial. The media is fully enslaved. But, no one knows it as it is not the Iron Curtain, it is the Velvet Curtain of entertainment that controls thought today. How do we break through it? I really do not know.  But I know that giving up is suicide.

Q) Do you feel that we should have a moratorium on nuclear energy ie. we just build what is in progress and then no more, or do you feel abandoning the under construction reactors and phasing out the existing ones is correct?

Zero tolerance on nukes is what I believe in. But yet, it can be phased out and replaced with alternate energy as is being attempted in Germany today.

Q) Which political party in your opinion reflects the best energy policy in India? Gujarat is considered to be a role model for the solar movement in India and large solar farms are already in operation there. Do you think that if the BJP comes to power, it can ensure an energy revolution?

The BJP is a pathetic backwards looking party whose core values resemble those of Genghiz Khan on a good day, the Congress is synonymous with corruption and surrender to the USA. We are caught between these two terrible choices. We need people to look beyond these two and build a genuine Green Left.

Q) Having committed itself to the industrial nations with multibillion projects, some argue that India is at a point of no return. A roll back on the nuclear power issues would mean a loss of the committed investments and take a huge toll on its economy and society. Your reactions?

I prefer poverty to death by stupidity.