Independence Day, A Poor Girl’s Picture and a Facebook Discussion on Nuclear Energy 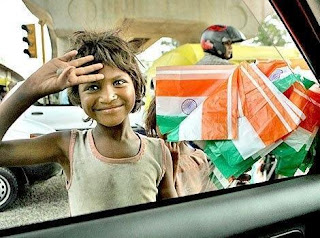 What emotion this picture would evoke in you? Here is a poor girl on Delhi street force-smiling in order to sell the plastic flags (most probably China-made!).

In his comment on Facebook over this picture, a senior opinion-maker associated with a national security think-tank run by the Ministry of Defense said: “This girl needs a good life: education and for that electricity. I support electricity generation through nuclear energy.”

Soon, when the discussion moved to nuclear energy, the commentator resorted to allegations of foreign funding, anti-nuclear arguments being based on distorted facts, and by the end of the discussion that ensues, several times he suggested that a “ruthless” treatment should be meted out to such people hampering India’s development. In his last comment,  he said ” I endorse the stand taken by the government against Koodankulam agitators.” That means supporting illegal cases against more than 55,000 people, including above 6,000 cases of “sedition” and “war against the Indian state”. And the victims of this repression include several hundred women and even a 60-year old visually challenged person in Idinthakarai village.

Didn’t the PM’s Independence day speech today urge the citizen to have same rock-solid consensus on issues related to development which appears in the matters related to “national security”? But on the ground, thousands of people in Koodankulam today observed the Independence Day as a “black day” in protest, just as the last republic day was boycotted by the Jaitapur people.

Such dangerous simplifications and linking good life and education with access to electricity and further to nuclear energy is not new in India. During the debate on the nuclear deal in the Indian parliament, none other than Rahul Gandhi referred repeatedly to the darkness in Kalawati’s house as a reason to expedite the deal. When the prince said it, another sycophant minister declared: those opposing the Indo-US nuclear deal are anti-people! Even the Australian PM Julia Gillard, while justifying her U-turn on selling Uranium to India, said its necessary for the Indian poor!

But the point the commentator missed is this:

The picture is taken in NEW DELHI. Its NOT a place where electricity hasn’t reached. It is DESPITE the “development” in Delhi based on GDP, high-ways and malls.

Every time the government and its cohorts have to justify the iniquitous, eco-destructive and jobless growth model, they shed tears for the poor. But what is the reality?

Despite a nearly 2-fold increase in the total electricity production over last 2 decades, the number of un-electrified villages is almost same – a staggering 40% ! So there is no actual link between a rise in power generation and access to electricity for the poor. We definitely need to look into factors other than the supply-side mechanisms.

Also, nuclear energy is definitely not going to help the poor as it can only cater to a consistently high-demand consumer, which cannot be the villages as their requirements vary highly depending on day/night, agriculture season etc.

India has diversified and decentralised energy requirements but that is not visible to policy makers who are either obsessed with the top-down model of development or are simply bought by the international corporates.

Anuj - Does electricity alone guarantee a good quality of life? I don’t think so. Rather than thinking of reducing our needs and consumptions, we are so enamoured with gadgets and material lifestyles that we think nothing of the dangers and costs of generating nuclear energy. Just so that we can live in our air conditioned comforts, we put thousands at misery right from uranium mining to power generation in the reactors. The cost of setting up such gigantic reactors is *huge* and rather than this colossal waste of time and money, so many renewable and sustainable energy options are available. Sad that that rather than considering poverty alleviation, people think only of their own selfish comforts and needs.

Rajiv Nayan Electricity Conservation is a language of modern elites which are travelling all over the world in a plane fired by oil and other scientific inventions which are highly dangerous but hardly highlighted. Villagers live in villages burning Kerosene oil. Those who are talking about dangers need to honestly study the impact of fossil fuels on human lives. No one has any argument about the relevance of renewable energy, but its delivery is benefiting only urban elites sitting in metros for a better environment, not better lives for teeming millions. The protest against nuclear energy is motivated, and it is bluffing innocent illiterate masses. The need is to identify these vested interests and strip them naked.

Lily Riley @Rajiv, you are a short term thinker. You know as well as anyone that girls life is not going to change by adding Nuclear generated electricity. However, adding another pool of nuclear energy risk to the global villiage will at some stage, weather in the instilation, remoxing ( excuss the pun), maintenance, or accident by human or nature cause poisioning of our world. India will change. The risk is the change of genetics (please educate your self on deformity outcomes post chenobyl). Nothing will spare your comfortable child relative, or the untouchable people of India. Additionally I find your comments appauling, you with your image all nice and clean in a comfortable shirt, being compassionate to a begger child, know and treated in India as an untouchable. Pull the other finger LOL

Rajiv Nayan I know what you people have done. As I posted earlier, you run someone’s agenda. Make your report public and come for inquiry. There are many such NGOs-human rights variety generate reports to make money from Western foundations. It is sensational but criminal. Actually, you people should be booked.

Anuj Wankhede In case you are not aware, India is nowhere near Homi Bhabha’s dream of Thorium nor his (in)famous assertion that nuclear power would be so cheap that one would not need to even meter it……

Rajiv Nayan We have tested all the prototypes of all the stages. we have to undertake mass production at the third stage before we enter into the third stage using Advanced Pressurised Heavy Water Reactor stage and optimally using thorium. We must not be deterred by agents posing as activists.WE WILL DO IT WHATEVER COMES

Rajiv Nayan yes, because people like you fit for mental asylum are running the anti-nuke movement, and using senseless language. The law needs to take its course.

Another one from Rajiv Nayan:

Rajiv Nayan You are an activist and refuse to listen to reason. It is not advisable to talk to people like you who have fixed views based on certain kind of literature. I think the government should stop engaging a handful of you who are merely good for disruption and destruction. I endorse the stand taken by the government against Koodankulam agitators. Now, I am sure who they could be

You can View and download the PDF version of the discussion here: