Cotton in the ears and sawdust in the skull - Shinzo Abe

Shinzo Abe – A PM without conscience, wisdom or compassion.
-- By Anuj Wankhede 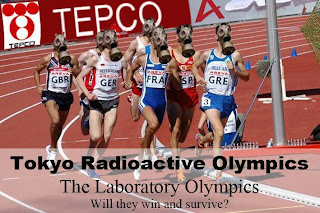 Does this not sound unreal?

Even as the situation at the crippled Fukushima-Daichi Nuclear power plant rapidly goes out of control, the Japanese Prime Minister Shinzo Abe seems to have his goal set on winning the bid to host the 2020 Olympics in Tokyo!


Abe plans to travel to Buenos Aires where the International Olympic Committee members will vote on Saturday (7th September) to choose a host city for the games.

Sure, we do not expect a modicum of intelligence from our world leaders today. If it is Abe in Japan, then it is the likes of Manmohan Singh in India or Obama in the US who behave like absolute fools when it comes to taking wise decisions. We, the citizens have learnt to have as little or possibly no expectations from these “world leaders.”

But has it also become a pre-requisite to have cotton in your ears and sawdust in your skull to become the Prime Minister of a nation?
That’s because the actions of Japanese Prime Minister Shinzo Abe seem to indicate that this is exactly the case with him. He probably has blindfolded eyes too (besides the cotton and sawdust) because he cannot see what’s beyond his nose (probably, not even that much)

The March 11, 2011 earthquake and tsunami shattered a major part of Japan and left it in shambles within minutes - causing enormous damage to life and property. Given the propensity for natural disasters - particularly by earthquakes – Japan was in a better emergency preparedness mode than any other country in the world. While this massive earthquake would have made many a skyscrapers collapse elsewhere and flattened cities, the good construction and planning in Japan saved further human and economic losses.

But among all these brilliant planners and designers were nuclear scientists who consider that whatever they say is gospel and Holy Grail. They claim to know the best because at some point they managed to add a “nuclear” tag to themselves and were instantly teleported from being ordinary human beings into pantomaths (persons who have reached the pinnacle of knowledge and know everything.)

At Fukushima (about 150 miles off Tokyo) on the Pacific seashore, THEY built was a huge nuclear plant with 4 gigantic reactors, none of which were able to take the brunt of the quake and tsunami onslaught and are now literally at an angle worse than the Leaning Tower of Pisa. “THEY” in this case is the Japanese government, prodded by the USA government and greedy corporates and which have now been mothballed by the utility that ran and is 'apparently' still running operations there however shoddily called TEPCO (Tokyo Electric Power Co.)

Much has been said, written, photographed and videos have shown about the current state of the reactors. The world knows the results of the commission of inquiry setup to go into the facts of the case and how TEPCO was exposed – nay, hauled over the coals - in that report and was shown as a greedy utility operator which cut corners to save money even after repeated warnings about plant safety. The world also knows how the governments’ regulatory agency worked in collusion with TEPCO and overlooked all these discrepancies. The world is also aware of how the government of Japan overtly and covertly tried to do a (shoddy) cover up job about the actual damage to the Fukushima Daichi nuclear complex and indulged in complete lies, half-truths and shameless cover ups to claim that everything at Fukushima is under control.

One could have forgiven all these and either condoned them or punished the guilty later had it not been for the fact that despite over two and a half years passing by, the situation at Fukushima has become far more serious than want it was in 2011. Instead of improving, things are rapidly going downhill and spiraling out of control.

And yet, the government of Japan - led by the cotton and sawdust PM Abe - seems be in a complete denial about the severity and the criticality of the situation at Fukushima just outside Tokyo city (and hence the point of him also being blindfolded.)

Let’s look at the material facts which Abe should surely be aware of:


1)TEPCO simply cannot be trusted – neither in its words, nor its promises, nor its abilities to handle the situation.

2) The reactor buildings are in an extremely precarious condition and another earthquake may result in a collapse of the whole structure.

3) Heavy machinery used at the plant was damaged by the 2011 events and there is limited machinery to do any meaningful work immediately until replacements are built.

4) Hundreds of tons of highly radioactive spent coolant water are leaking from make-shift drums lying in the open daily and radiation levels have risen to a level of 2200millSelverts – levels enough to kill within hours.

5)The situation is so critical that thousands of fuel rods have to be removed from the reactors in an extremely delicate manner or else they will set off an atomic chain reaction which will go out of control and cause havoc.

6)Over 150000 people have been evacuated (displaced) to temporary shelters with no clue about when (if ever) they will return to their homes.

Amidst all this, our friend Abe has this to say:


And yet, TEPCO itself has admitted that the decommissioning process for the plant has been forecast to take about 40 years and cost at least $11 billion. Independent experts say this is an optimistic assessment and the actual time frame and costs will be far higher.

But the bid for hosting the 2020 Olympics is not the first cardinal mistake/sin that Abe has made and is continuing to make.

He has been in a tearing rush to push Japanese NUCLEAR supplies and “technology” to developing countries!! Had it been a matter of Toshiba exporting laptops & televisions or Mitsubishi selling motorcycles or Hitachi selling cranes & train locos, one could have completely understood it. But for JAPAN which was nuked twice and is still limping somehow with critically failed nuclear power plants to export NUCLEAR??? Unreal. Surreal.

What can be more shameful than sitting a few miles away from the world’s worst nuclear disaster and yet sell the very cause of this damage to others simply to salvage your own private companies! Hell, these companies such as Hitachi, Toshiba, Mitsubishi Heavy etc are supposed to operate under the capitalist market driven forces. They are not doing any charity. Let them fend for themselves in bad times. It is not as if they have shared anything meaningful during their good times (unless it benefited them in some manner.)

Any other person of reasonable intelligence would have counseled his colleague from another country to give up on the nuclear energy dream and would have also pointed out to the shut 50 nuclear reactors around Japan and how the country still manages without them. Hell, even the Indian Prime Minister -with his near sub zero IQ - would have grasped that logic had Abe explained it to him patiently and with his hand on his heart.

But NO, sawdust does not give people intelligence. Intelligence requires brains while counseling others and for genuine caring, one needs a heart - both of which Abe has shown that he does not possess by his repeated crass actions.

How else do you explain the aggressive bidding and lobbying by Abe and his government for building Turkey’s nuclear reactors and winning the bid recently? This, even after knowing that seismic hazard is very high in Turkey – a country that has a history of massive earthquakes measuring about 7 and above on the Richter scale every 5 years causing huge damage.

Is this responsible or ethical behavior by a world leader?

I believe that this is crass, repulsive, unethical and unprincipled behavior by the Prime Minister of a country whose country has not yet come to grips with its own disastrous situation.

But now Abe seems to be going even one step further. He has his eyes firmly set on winning the 2020 Olympics and is being goaded along by vested interests from the West who have a huge economic stakes in Japan, the value of the Yen and the levels of Nikkei.

Their only concern is to have a dog and pony show for the global audiences and pretend that all-is-well in Tokyo and hence to come and do business with Japan. A showpiece to show that it's "business as usual."

Unfortunately, like everything else, what Abe and company miss out is this:

a)  Fukushima and Japan's problems are not going to get over just yet, certainly not in the next 7 years.
b)  An event like the Olympics will put extreme pressure on resources – both financial as well as human resources.
c)   It will shift focus away from the tasks at hand and will force the best planners to work towards the Olympics rather than finding creative and immediate solutions to defusing the Fukushima crisis.

Hundreds of thousands are still coming to grips of the events which occurred on 3.11.2011 and are going through extreme emotional (not to speak of financial) trauma. In such a situation, the PM should in fact have declined any offer to host the 2020 event even if it had been made proactively by the IOC.

Abe's attitude towards attaining cheap political and economic mileage smacks of heartlessness and places him right next to Queen Marie Antoinotte for complete callousness towards his own people.

All that the 2020 Olympics will do is to divert the nation’s attention from the impending doom and create a fake temporary feel good atmosphere.

Unfortunately, if the Japanese government does not accord the priority deserved to tackling Fukushima, then Japan as we know may well not exist to host the 2020 Olympics.

Are you listening Mr. Shinzo Abe?

Oh I am so sorry, I forgot about the cotton in the ears…..