As the co-founder of one of the biggest and (once) most respected IT giant companies, it is with great distress that I have to dissent with you. Mind you, I had great respect for you until I read these news articles (and this) about your statements made to impressionable college students at St. Xavier’s college in Mumbai about the benefits of nuclear energy.
It is even more shameful that YOU as a guiding symbol of youth chose the days and month of the deadly Hiroshima and Nagasaki atomic bombings to make such statements. We know from past experiences that the timings of such statements and “seminars” are usually fixed by the Department of Atomic Energy/NPCIL etc to deflect public attention from core issues related to nuclear. And apparently you have willy-nilly fallen into that trap – lock stock and barrel.
I was shattered that you as a person with so much knowledge, deep understanding of business consulting, outsourcing and technology among many other skills can actually go around town with such juvenile, rash and factually incorrect statements.

I must say that I have lost all that respect for you Sir! 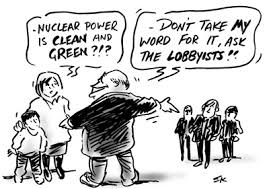 You were supposed to be a role model for students; not be a champion of ASSOCHAM or for FICCI or for foreign companies (which may give business contracts to Infosys) or to butter up to the government and bag more contracts by your public utterances (you already have the Padma Vibhushan and Padma Shree award, so these do not matter - so the Presidents post is probably what you are aiming for?)

Seriously, Sir, it sullies your image to get into such issues of national and international significance with zero knowledge.

To top it all, you are also a member of the advisory boards and councils of several educational and philanthropic institutions, including Cornell University, INSEAD,ESSEC, Ford Foundation, the UN Foundation, the Indo-British Partnership, Asian Institute of Management, a trustee of the Infosys Prize, and a trustee of the Rhodes Trust, Chairman of the Governing board of Public Health Foundation of India and serve on the Asia Pacific Advisory Board of British Telecommunications.
Ironically, you are also the author of the book “A Better India, A Better World” (it rings a bell about the BJP promise of Acche Din)

Frankly, it would have been quite easy to dismiss such statements you have made had they came from some ignorant or an illiterate politician. But from you - coming from such an impressive pedigree and with an impressive background of engineering degrees (including that from the prestigious IIT, Kanpur) and being a business tycoon as well CEO, Chairman of Board and Chief Mentor at Infosys!! Speechless.

Notwithstanding all the above, it is with great pain that I will have to take apart your statements – bit by bit.
--- The key part of this statement is “As long as we are diligent.” As long as nuclear industry exists Mr. Murthy, it will remain opaque otherwise, or else its dark underbelly will be exposed. The nuclear industry is notorious for its means of doing business. Costs are under-reported when taking orders, the nuclear plants take forever long to be commissioned, cost overruns of even 100% are common place in the industry, the nuclear industry frequently cuts corners on safety and then puts up its hands saying that whatever happened is a ‘Beyond Design Basis Accident’ (BDBA).” When the industry itself claims that it is not free from possible accidents (plus given the massive corruption involved in these deals) can you – as a businessman – seriously imagine that corners are not being cut? If you think so, then you certainly are (or pretend to be) an extremely naïve person indeed!!

2.  "Citing detractors who quote disasters like Fukushima and Chernobyl, Murthy said the number of people affected in these tragedies are far less than those who die in car accidents."

---- Sir, what is the source of your information? Various surveys by reputed international NGO’s (who are not aligned to the UN) have reported over a million excessive deaths related to the Chernobyl disaster. These include cancer, thyroid problems, acute and severe depression besides heart and organ failures and birth defects.
If it is the WHO which is your “source”, then please read the WHO-IAEA deal about reporting nuclear accident statistics which was signed about fifty years ago. (IIT should have provided you with that much knowledge?)
“In 1959, the International Atomic Energy Agency(IAEA) and World Health Organization(WHO) entered into an working agreement which is out-of-date and conflicts with the research of the WHO to determine the effects of ionizing radiation exposure on human health. We are concerned that the language of this agreement (WHA 12.40 approved by the 12th World Health Assembly on 28 May 1959) mingles promotion of nuclear technology, including nuclear power, with the WHO’s mandate to undertake international health research work on people exposed to ionizing radiation-a product of this same nuclear technology. Specifically the WHO, as stated in its Constitution, has a mandate to “promote and protect the health of all peoples.” Health is defined as “not merely the absence of disease or infirmity” but “the enjoyment of the highest attainable standard of health.” This highest attainable standard “is one of the fundamental rights of every human being without distinction of race, religion, political belief, economic or social condition.” (Link to some PDF’s and sites here or here )
Your statement is shocking as it comes from a person who is the Chairman of the Governing board of Public Health Foundation of India. It is my honest suggestion that you link up with some genuine medical experts who have spent over four decades studying the effects of radiation. (You can begin with Dr. Helen Caldicott here)
Besides, a car accident victim may die, but the future generations do not suffer from cancer and other illnesses. Here, we are talking about medcine and not about the engineering of cars and roads Sir. 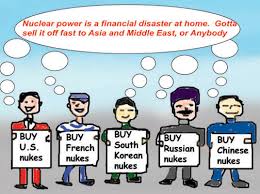 Sir, please first read news and then give your "expert" comments. The nuclear share of energy generated in France for 2014 was 77% and not 85% as you claim. (Year wise and country wise generation data from the very champion of the nuclear industry – World Nuclear Association is here Link)
Besides, France has committed to drastically scale down its nuclear energy targets over the next decade to 50% (even as it sells it's failed technology to India via Areva)
You may be shocked to read this in the venerable Scientific American (June 29 2015 – here)
“The host nation (France) for this year’s climate talk (the UNFCCC - COP21), is pumping the brakes on one of its most successful ways of controlling carbon.”
Look at the REAL facts:
Areva of France (a majority owned – over 80%- held company by the French government till recently) has deep problems regarding its reactor designs. From Olkilouto in Finland, to Hinkley Point in UK and to Flaminvilla in France itself, its EPR reactor other reactors are faring very poorly.  Massive cost over-runs, problems with reactor designs and control panel problems have showed how this industry really works.
As a CEO of a large global organization; would you lead, respect or champion for an organization like Areva which is planning on setting up N-plants in Jaitpur? A company which has not made any profits since 2010 (it's latest figures quote some 4.8 billion dollars loss for 2014).
Or championing for the corrupt Russian companies which delivered faulty valves for the Kudankulam nuclear plant?
Or championing for US-Japan General Electric (GE) which supplied the Fukushima reactors, and which has now thrown its hands up for the accidents claiming that they were “Beyond Design Accidents”?
It is indeed surprising that a person of your stature does not know about these facts before speaking to gullible students!! I would rather call it as deliberate suppression of material facts. Or, probably hidden agends.

34. “There is nothing which is risk-free and hence, it is important to look at the trade-offs”

Sir, kindly leave your risk appetite for your corporate interests and do not mix them with public health issues. I would suggest that you don’t look with blinkered eyes at the bottom line every time you have to make a statement – sometimes; it is wiser to think of the overall good of people in the long term; not about short term quarterly profit figures on the balance sheet.

-- Again, as a businessman, you should know very well about the total lifecycle cost of any asset. You may relate better to the computer parlance term which we call as TCO (Total Cost of Ownership) Please get some of your so called super intelligent engineers to come back and report to you with what are the REAL carbon emission figures for a nuclear power plant over its lifetime. 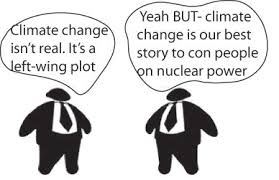 Begin with the humongous environmental costs of uranium mining, its milling, processing, transport and fabrication into fuel rods. Then, I suggest that you look at the amount of cement and concrete used for setting up these reactors. These are massively polluting industries. And, so is steel, which is used in huge numbers. Besides that, think about all the vehicles deployed to carry all this raw material used for set up these reactors spewing massive amounts of diesel. And then finally, let’s talk about decommissioning of these plants; the cost of which can easily be as much as the cost of building them in the first place and which will again use many tonnes of cement/concrete. A study of 103 nuclear plant’s metadata as compared to renewable energy has shown that during its typical lifecycle, a N-power plant generates 66g/kWh of CO2 as compared to 9.5-38g/kWh. This makes renewable energy 7 to 16 times more effective in fighting climate change. (PDF here) Hopefully this will make you more aware of the reality, Sir!!

Mr, Narayan Murthy, it has been proven beyond a shadow of doubt that nuclear energy is not the solution to climate change.

Look at renewables and energy efficiency. Think out of the box and society Sir, as you once thought for Infosys. Please get the bigger picture clear about energy and climate issues cleared in your own mind first before rushing into such debates.

And finally Sir, if you can come up with a credible solution to the radioactive nuclear waste issue, you might even get a Nobel Prize. And while you may ponder about that, please also figure out a way so that nuclear proliferation and weapons are not deployed using these reactors as a front.

(The author can be reached on benchmark.anuj@gmail.com)