Nuclear Safety is NOT a “moving target Mr. Narayanasamy

V Narayanasamy is the Minister of State in the Prime Minister’s Office (PMO) which is a top level position in this country. Obviously, this position cannot be reached by sycophancy alone (although that does help), but one would also need a modicum of intelligence and common sense too if one were to occupy such high positions – not to talk of having an IQ in double digits.

Unfortunately, the proof of the pudding lies in its eating; and Mr. Narayanasamy may well have to eat his words.

In his statements to the Lok Sabha and elsewhere, he says “Safety is a moving target in nuclear power plants and is continuously evolving based on the reviews by utilities and AERB besides internationally evolving standards”

Mr. Narayanasamy, if you know something is not proven safe; do you still decide to stake your life on it and risk your life and livelihood and put your future generations at risk too?

Well, to be very honest, I do NOT care if this gentleman wants to stake HIS life on this and play a lottery with HIS life. But I do care about other Indians who are being made a scapegoat in this high power game which is putting millions of lives at risk. The recent anniversary of 3.11 should be a stark reminder of this risk. March 11 2011 was the day on which the whole world watched the horrors unfolding in Japan and the subsequent meltdown of 3 nuclear reactors. These reactors are still in a critically dangerous condition and have the potential to wipe out a good part of Japan and humanity. Over 1,60,000 people have been unable to return to their homes for the past 2 years and there does not seem to be reasonable chance of them being able to do this any time soon. The effects of the Fukushima accident have been recorded as far as the USA and it continues to pollute the oceans with its radioactivity, affecting fish and even vegetables and milk.

Sir, in case you need a primer to understand the basics of radiation and its effects, reflect upon the fact that Chernobyl happened over a quarter of a century ago -yet, it cannot be inhabited again. Neither your Russian friends nor NPCIL will tell you the true facts. But, surely, you were eager to meet the chief of IAEA – Yukiya Amano – when he arrived in India on the very day the world was condemning nuclear energy. As part of the PMO, you would have let this government prostrate before this “gentleman” who is a known agent for the USA and to claim that we have won a historic victory for India. The Indo-US nuclear deal was in itself a shameless abdication of morality and sell-out to the western capitalists. What’s happening after that is even more amazing. Your government is signing Memorandum of Understandings and agreements with all and sundry countries including USA, France, Britain, Canada, S. Korea, Australia.

Selling economic benefits is something that the citizens of India have now got accustomed to. But to willingly put the lives of so many innocent people at risk can only get blood on its hands for this government. This is not something which this country can – or should – take lying down.

Obviously, there is something for the Government to gain out of investing so much capital in a totally unsafe and potentially devestating technology. While most people know what the quid pro quo is, I do not wish to delve deeper into that issue and would rather leave it to the Comptroller and Auditor General (CAG) to investigate and report. 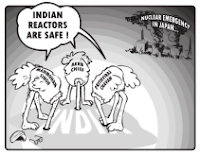 If safety is indeed a “moving target”, then it means that all the reactors built during the last 40 years cannot be termed as 100% safe. Correct?

Yet, your own government – the Prime Minister himself – gave an assurance to the parliament on May 16th 2012 on the floor of the house that ALL existing nuclear reactors in India are safe and safety will be accorded priority (sic).

Here is the safety record of Indian nuclear reactors prior to Fukushima in a nutshell:

31 Mar 1993 – Bulandshahr, Uttar Pradesh
The Narora Atomic Power Station suffers a fire at two of its steam turbine blades, damaging the heavy water reactor and almost leading to a meltdown.

31 March 1993 Two blades of the turbine in Narora (NAPS) Unit I break off, slicing through other blades and indirectly causing a raging fire, which catches onto leaked oil and spreads through the turbine building.  The smoke sensors fail to detect the fire, which is only noticed once workers see the flames.  It causes a blackout in the plant, including the shutdown of the secondary cooling systems, and power is not restored for seventeen hours.  In the meantime, operators have to manually activate the primary shutdown system.  They also climb onto the roof to open valves to slow the reactions in the core by hand. The incident was rated as a Level 3 on the International Nuclear Event Scale, INES and is the most serious incident in India which fortunately did not get out of control.

For more details refer to respected and renowned physicist M.V Ramana’s excellent documentation of this, it may just open your eyes.

Besides this, there have been a number of reported (and many unreported) cases of radiation poisoning of works at Kaiga and Rawatbhatta while the workers were at their jobs. (see here and here)

To callously claim that “safety is a moving target” means that the issue of safety will be addressed on a day-to-day basis and corrective action with be taken only AFTER some regulator insists (which the Indian regulator is utterly incapable, inefficient and unwilling to do.) This approach can only result in a catastrophe. It is like using a pay-as-you-go prepaid mobile connection; the balance is going to run out sooner than later.

The tsunami which hit Southern India in 2004 affected the Kalpakkam (MAPS) nuclear facility leaving it flooded and in a situation similar to Fukushima. 4

Yet, you and your government claim that Koodankulam is 100% safe!! To jog your memory Sir, there is a tsunami colony where thousands of people reside just a kilometer away from the Koodankulam Nuclear plant. Is this not proof that a tsunami DID actually inundate this region in 2004? But then I guess that even a high school student can connect the dots and make a reasonable judgment; although you may be incapable or unwilling to accept facts and choose to continue living in your ivory towers.

So, Mr. Naraynsamy, do you habitually let your family into dangerous situations and claim that since safety is a “moving target” it’s an acceptable risk? If God forbid something happens to them, will your conscience be clear and think that this was just another lottery you played and lost? I am sure you will not. You and your ilk would rather sit and have your families in the comfort of Delhi and put millions of people at risk all over the country. Your statement indicates such a high level of over confidence that it borders on being called an ego problem. This government will not learn from the fact that the Japanese government had the same attitude which led to the man-made catastrophe in 2011.

The parallels between the functioning of the Government of Japan (GoJ) pre and post Fukushima and the Government of India (GoI) are uncanny as are the similarities between the functioning of TEPCO and NPCIL as well as that of the regulators. It was this nexus along with greed and the overconfidence of all parties concerned that caused the dome of the reactors to be blown away spewing radiation and resulting in misery to everyone around besides being a perpetual threat now. Perpetuating the same lies – shrouded in deliberate secrecy – unaccountable to anyone and a sense of megalomania pervades the Department of Atomic Energy and its departments like NPCIL/BARC/AERB etc. The same thing happened in Japan, and the results are there for the world to see today.
But then, those who do not learn from history are condemned to repeat the same mistakes.

Only – in this case – neither history will forgive this government nor will the people let you commit the same mistakes. There is too much awareness of the facts and the hidden agendas of this government for people to trust this regime anymore.

SAFETY IS A GOAL, A FIXED TARGET THAT HAS TO BE ACHIEVED. IT IS NOT A MOVING TARGET. SO DO NOT CHANGE THE GOAL POSTS Mr. NARAYANSAMY.