It is one of India’s best kept secrets. This is the story of genocide.

The Dark Underbelly of Uranium Mining in India

After over 50 years of Independence, there is another India which nobody talks about.

Because nobody knows or want to know about Jaduguda.

I spoke to hundreds of people in Mumbai and elsewhere on streets, in restaurants, bus stations, railway platforms, airports but not one person has ever heard of a place called Jaduguda in India or about its sad legacy. Sure, they all wanted round the clock electricity and were nonchalant about nuclear power. If only they knew.......

What is happening in the name of National Pride and Self-Sufficiency is a NATIONAL SHAME. A CRIME AGAINST HUMANITY. 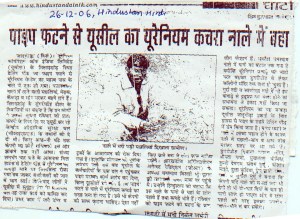 Next time you charge your mobile phone, switch on the AC or your TV, think about the enormous and horrifying cost being extracted from locals and the tribals.
Jaduguda in Jharkhand is one such cursed place. Cursed, because it has India’s largest uranium mines. A curse called uranium has poisoned generations and will continue to haunt all future generations too.

This is a story which a few people have tried to tell. Many times over.

Yet, no solution is in sight to this living horror.

But then, probably nobody has found an answer because nobody WANTS to find an answer?

The power that is fed into homes using nuclear energy has some of its genesis in Jharkhand, from where the raw material – Uranium – to needed power these reactors is extracted or mined.

India has sufficient uranium deposits to build a few hundred nuclear bombs but it does not have the required amount of uranium to fuel its Atomic Power Plants. The largest deposits were found in the 1960s at Jaduguda and the nuclear lobby in India rushed in to exploit the ore there. Since 1967, the Jaduguda region of Bihar has been exploited for its uranium and so have its people.

The Department of Atomic Energy (DAE) formed the Uranium Corporation of India Ltd. (UCIL) with a mandate to explore and mine this precious ore. UCIL started the exploitation of man and nature the very next year in 1968.

Over forty four years later, it has created a tragic legacy which includes loss of health, disease, deaths, ruining of social fabric and professions, environmental destruction and irreparable damage to the ecology.

The only ones who have profited from this deprivation are those associated with the Nuclear Club – those who need uranium for dubious power and atomic weapons.

The Jaduguda mines (and to an extent, the uranium mines in Meghalaya and Andhra Pradesh) supply the bulk of the uranium needed as fuel to the ever increasing reactors in India. Currently, India has one Nuclear Fuel Complex (NFC) at Hyderabad in Southern India which is over a thousand kilometers from Jaduguda and even further from the North Eastern mines in Meghalaya.

The original mines at Jaduguda have since been expanded and now include the Narwapahar mines a few kilometres away. Together, they make it possible to extract thousands of tonnes of earth each day using a mix of techniques.

As it usually happens, the land where the uranium was discovered belonged to the tribals (adivasis), who had lived there for hundreds of years and co-existed sustainably with nature. Elders recall that the tribals were strong and rarely (if ever) fell ill. The ecology was self-sufficient with man and nature providing and caring for each other.

As usual with any nuclear project, there was complete secrecy. This was easy in India of the 1960s and remains so even today. Anything nuclear is considered top secret and classified information and the DAE has to be brought kicking and screaming into courts before they divulge any information – at times even misinformation.

UCIL’s job was of course made easier because of the remoteness of the mines and the lack of education among the tribals. Moreover, the tribals were a trusting lot – as they would later discover to their peril.

Ergo, when UCIL commenced operations there, they acquired tribal land and made no mention about the kind of material that would be mined. Nor did they inform the locals about the hazardous nature of radiation.

As long as uranium remains in nature, buried deep within the earth, it is not dangerous. But the mining process brings it out in concentrated quantities, which is further ground into dust, and it is this phase where radiation starts taking its toll by entering the body and the ecology.

To understand this better look at the uranium cycle below –

At Jaduguda, the ore is mined, milled, refined into Yellow Cake and dispatched to the Nuclear Fuel Complex (NFC), Hyderabad by road and then by trains.

As can be seen, uranium ore goes through a number of processing phases and at each stage it pollutes the environment in more ways than one.

It is important to note that unlike this diagram above, it is alleged that the depleted (or spent) uranium waste is brought back to Jaduguda for “disposal,” i.e. thrown away as debris!

When UCIL started operations, locals were promised firm jobs, medical facilities, schools, roads, better opportunities and some say even bribe money. There are stories of locals being taken to far off nuclear facilities so as to impress them about the high technology, cleanliness and safety of the project. The tribals trusted the government and were trapped.

For UCIL, there was a need for people to go down into the bowels of the earth and come up with the uranium ore for which it deployed the tribals. They needed labour because even the best of mining technology still needs physical labour. The open pit mining requires people to physically go deep down into the mines to dig further and load the ore for transportation to the surface. From there on, the other processes are also labour intensive.

What this means is that ALL these people working in the mines were subjected to radiation for prolonged periods of time. They inhaled the uranium, worked with no protective clothing and ate contaminated food. When they finished work, they returned home and their contaminated uniforms were handled and washed by the other people at homes who started getting affected by the secondary contamination.

This, however, was only one form of the uranium poisoning.

The process used for uranium extraction involves conversion into a slurry from which the precious metal is extracted. The rest of the sludge is sent into to the “tailing ponds” which are supposed to hold the highly radioactive slurry.

In reality what happens is that the tailing ponds are unable to hold all the slurry and frequently overflow, especially during the monsoons. More radioactive uranium seeps into the ground and contaminates the groundwater and rivers. 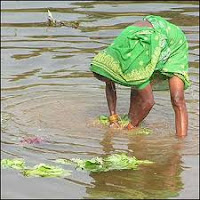 The locals are forced to use the downstream river waters for everything ranging from washing, bathing, sowing and irrigation.
It is from here that the whole uranium contamination/ poisoning cycle takes a massive leap into the food chain spreading far and wide via crops, fruits, and animals. The grass growing here is highly radioactive and when animals graze, it enters their bodies and contaminates the milk and meat.

In short, uranium enters every part of the ecosystem and continues to spread further and further via the rivers, fish, the vegetables and fruits grown there and thus, what starts as a local mine affects a vast region within no time at all.

It was the legal, moral and ethical duty of UCIL to warn the locals about what was about to hit them. But that would obviously have not suited the government.

Ideally, the whole land which was acquired for mining, blasting, processing should have been out of bounds for people and the tailing ponds made in such a manner that there is no seepage into the ground. Warning boards put up to indicate high radiation and danger zones, limit the access to site only message workers and decontaminate all material worn and handled by the workers at the site itself. The processed ore should have been safely transported in well covered vehicles to the nearest railway yard for its thousand kilometer journey to NFC Hyderabad.

All this is not a utopian dream. It is common sense.

But then, I forgot that we are talking about the DAE and UCIL. Agencies for which only the ends matter – not the means to achieve these nefarious ends.

The river, which runs past Jaduguda, is met by the murky outflow from the mine workings. Here, people wash vegetables, sow and bathe in this extremely poisonous water.

Nowhere in the region does one see warning boards. It is an open invitation to use the resources here and get poisoned.

Trucks which carry the processed material from the mines are open dumpers with just a piece of plastic thrown over the top – most often, even this is missing. The dumpers spill the material on the roads all the way from the mines to the rail yards. Radiation level meters (Geiger counters) frequently go berserk as the radiation count exceeds the maximum limit which can be displayed on these meters.

Scientists designing these counters probably never imagined that any civilian region would possibly have this amount of radiation.

School buildings have been made of stone which was extracted during blasting of the mines. Placing the radiation meters on their walls makes the counters beep furiously.

Probably military grade instrumentation with higher limits needs to be used in these “civilian” areas.

The transport from the mines to Hyderabad is another horror story. Look at the picture of this open topped dumper truck below. Often, not even a plastic sheet is thrown over it. The trucks spill the ore along the way on the road sides. The hazardous material is loaded casually on goods trains which carry this material along with rakes filled with edible items. The open trucks pass through various villages and small towns and evertime they hit a speed breaker (very common in rural India because of the prestige associated with having a speed breaker outside your home to make yourself safe from vehicles); these trucks spill the hazardous material / ore at the doorstep of residents resulting in high levels of cancer even in villages further away from the actual mines.

(Below) Ore Handling in India and in Developed countries

A technical committee advising the government, comprising representatives of pollution control board industries and a retired atomic energy expert have noted that radioactive radiations were less than the permissible limits in Jaduguda.

The Director of UCIL’s technical department Diwakar Acharya said this in defense – “They are all retired employees. Mining methods have changed a lot in the past two decades. Earlier, the workers’ health was in grave danger due to the lack of protective clothing and modern machinery. The technology we have today keeps them, as well as the local population, completely out of harm’s way,” he says.

The sad truth is that NOTHING has changed over the years here.

What has changed is the increased greed of UCIL, NPCIL, DAE and Government of India for more and more yellow cake…….