Technology is never a guarantee to safety - Part 2

A faulty jet fighter may lose you a battle,
A faulty nuclear plant will lose you an entire country.

In my earlier article “Technology is never a guarantee to safety - Part 1”  I wrote about the fact that the most high tech military aircraft have crashed despite being thoroughly evaluated for their technical prowess. Due to limitation of space, I could not get to the other facts of this industry and its eerie parallels with the Nuclear Power sector.

Over the past 40 years, more than half of India’s workhorse fighter jets, the Russian MiGs, have crashed — 482 out of 872 to be exact. Yet, Indian Air Force officials told India Today magazine that the MiG-21 was a fantastic aircraft, it is just difficult to land!!

It is not as if only the IAF jets have crashed. The Indian civilian airline industry too has had many crashes in its short history. Let’s look at some of these– not for posterity - but to understand the reasons about why they occurred. 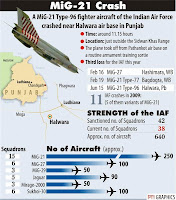 Sirsa, December 02, 2011 - MiG 21 crashes because the aircraft caught fire.
Reason- Cause not yet determined or disclosed but technical snags were supposed to have downed it.

Bikaner, Rajasthan, August 2, 2011 - MiG crashes in a field while on a routine mission.
Reason- Cause not yet determined or disclosed.

Chakri Dadri (near Delhi), 12 November 1996 - A mid-air collision between two aircraft leaves  349 people on board both flights killed, and making it the world's deadliest mid-air collision.

Reason- Failure of the navigation and the Instrument Landing System on the ground made the pilot lose contact.

Reason – An ageing 20-year old poorly maintained aircraft, which was supposed to be non-air worthy was put into service.

One can go on and on about the horrific civilian aircraft crashes.
They have claimed lives of several notable people from India - A.V. Birla, Mohan Kumarmangalam, Dorjee Khandu, Y.S. Rajasekhara Reddy, G.M.C. Balayogi, O. P. Jindal, Madhavrao Scindia, Sanjay Gandhi are among these notable and public figures who perished in aircraft failures. 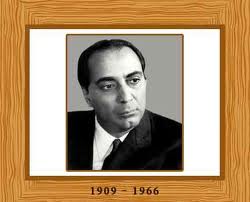 In fact, the father of the Indian Nuclear Energy program – Dr. Homi Jehangir Bhabha – was also a victim of an air crash when travelling by Air India Flight 101 in France on January 24, 1966.

As of end 2011, nine crashes involving IAF planes had taken place which included five MiG-21s, two Jaguars and one MiG-29, besides a Sukhoi SU-30 crash near Pune.
Let us also bear in mind that these fighter jets are missile capable and carry nuclear payload (weapons) during war.

If you want further damning proof, then check what Rakesh Sharma, the first Indian astronaut has to say about the state of our defense establishments. He outright blames faulty planning in defense public sector units for the MiG crashes.

Rakesh Sharma goes further and I quote “As a test pilot with the HAL I would send back fighter planes to the laboratories if I detected snags in their parts. But I soon found out that instead of doing research and development on these parts, the laboratories fitted the parts in another fighter plane. The parts used to keep repeating the full circle consuming time and energy without any result,  HAL does not even have an in-house test-pilot team”

Also see about what this serving officer with IAF has to say: "Flying a MiG-21 amounted to "violation of his fundamental right to life", a serving wing commander has told the Delhi high court - (Times of India)

And this is the same type of government owned public sector undertaking NPCIL which is implementing the Indian civil nuclear establishment!!

And now read this too – A study of the past ten MiG crashes showed that experienced pilots with hundreds of flying hours to their credit were behind the controls in most cases (‘Old aircraft, not pilots’ inexperience, behind MiG crashes’ and here.

So the billions spent on the latest technology have failed NOT because of any human failure; they were let down by the latest “fly by wire” technology. And yet this is the exact same logic which the NPCIL bosses use to justify their purchases and which the government gives credence too.

At Koodankulam, India is putting up nuclear reactors which have the so-called “core catcher” technology while at Jaitapur, NPCIL will be using EPR technology from France - both of which are not fully tested. In fact, the French reactor is not even certified by the US and Finland has almost cancelled its plan to build a reactor based on this technology. GE in fact plans to set up reactors in Kovadda (Andhra Pradesh) using un-certified technology.

Yet, the entire nuclear establishment, including the NPCIL and the government has given a carte blanche certificate to these technologies,knowing fully well that it is an untested, non-certified design and yet claiming that the billions of dollars are being spent on a “safe” reactor!

Has India become a dumping/junk yard for all these failed projects just like it has been to the disastrous and worlds largest ship breaking yard at Alang, Gujarat?

Even neighboring "poor" Bangladesh is raising its voice against the outdated VVER Russian reactors planned there and which has been installed in Koodankulam with so much fan-fare.

However much the government of India tries to cover up and dispute, the fact remains that Murphy’s Law will always catch up.

“When something has to go wrong, it will. Because, for no other reason but because of technology!”

This is not making a case that anything high tech ought to be rejected outright because of fear - Far from it.....But one cannot look at high tech as a savior. Accidents happen despite the best of technology and people being in place. The Three Mile, Chernobyl and Fukushima accidents happened primarily because the technology used was faulty and also due to human greed. The designs were wrong. Maintenance was poor and safety took a back seat out of nonchalance.

If, at every stage, we continue to say that, “We have learnt from our past mistakes and will ensure not to commit them in future” then it represents a defeatist and negative attitude ; a fatalistic attitude.

Any other accident can be taken as a learning experience and a chance to improve in future. However, a nuclear meltdown leaves people and whole countries in a total mess. It is a huge human loss, an economic and environmental disaster and what is even worse; its effects remain for hundreds of years.

As a technical professional particularly involved with computer systems, I have seen absolutely dumb designs, which make software and systems crash. It happens even with giant companies like Microsoft or Google. They mess up big time with software and updates and it takes a whole lot of time, effort, skills and money to clean up the mess caused by a stupid design failure.

I would hate to see this horror happen in any nuclear reactor. Enough has been written about how the Americans infected the Iranian nuclear program with stealth viruses. Does anyone imagine that the Russians or the French would not have done something on these lines? A friend today could very well be your enemy tomorrow. And it is very easy to infiltrate through technology.

So how much confidence are we putting into these friends, and by imagining that nothing is inherently wrong in these systems – either by error or by design? None of the countries are so clueless as to not understand that political situations are extremely fluid and can rapidly change for the worse.

Where will India go when it realizes that its former friends are now its enemies and without them or their fuel / aid it cannot run its reactors?

Conversely, should India continue to be friendly with these countries out of fear of retaliation and retribution and risk losing support for the nuclear program and also lose its military support?

That, my friends, is called the “moment of truth.”

Neither USA, France, Japan, Australia, Korea nor Russia will give anything to India without extracting their own pound of flesh.
That is the reality  tied between nuclear energy and defence deals. And it won’t change because India refuses to accept the fact that its civilian nuclear program is isolated from its defence program.

Yet, India is choosing a dreadfully dangerous path with its quasi civil nuclear program. It is falling victim to the policies practiced by those countries which have a vested interest in business and military affairs. The Russian nuclear program is falling apart, and its industrial machinery is unable to sustain goals set up during the Cold War era. France has so much of domestic resistance to nuclear power that the government may find it extremely difficult to prop up Areva – the French government’s baby. In the US too, the nuclear establishment contributes hugely to Senators via political funding (lobbying). Westinghouse of USA is ¾
owned by the Japanese giant Toshiba and wields enough power in US energy policy decisions thanks to its financial “support” to politicians during elections.All these countries have a huge unemploymnet problem and cannot allow their large defense industry to stall as it will cause local discontent and loss of votes. Eventually it is all about politics and votes!!
Why not wake up to these realities of geopolitics. Do we really need to spend this money on questionable technology?
Common and business logic makes one evaluate everything in terms of “risk-reward ratio.”
So, whether it is investing in projects or for strategic purposes, we subconsciously evaluate everything in these terms. Even while driving a car, we always look at the risk-reward ratio before speeding or overtaking another vehicle!

The risks involved with nuclear energy do not justify the rewards.

With anything nuclear, it is never a question whether an accident can occur. The question is WHEN it will happen.

This is an undeniable fact and there is no escaping it.

There is absolutely no point in saying that we have the latest technology.
Because eventually, technology is not a guarantee to safety.