Economic Times looks at Himalayan Profits not at a Himalayan Disaster


he Economic Times this week carried an extremely biased article regarding the Uttarakhand flood tragedy titled “Uttarakhand floods: Why damning the dams is Himalayan blunder” by Avdhash Kaushal  (click here to view the said article.) 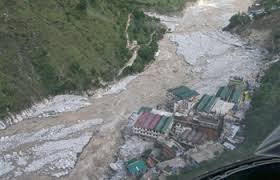 While the appearance of such a biased article is only to be expected from a “pink paper” that does not leave any stone un-turned to promote big businesses and the so called “development” based policies which the government adopts; it is a completely biased article, with deliberate falsification of ground level realities and even the language used which are not befitting one of the largest circulated business and economy publications in India. What is even more jarring is that its own sister publication from the Bennet Coleman Co.; the Times of India has carried many articles (including one in its July 3 edition) which talks of the possibility of a repeat of the Uttarakhand tragedy in the neighboring hilly state of Himachal Pradesh (H.P.) for the same reasons as Uttarakhand.

The authors' agenda appears to be as defensive as possible towards all things that can damage the ecology & environment and he goes on to blame NGO’s, environmentalists and others working to save the fragile planet by calling them “jholawala’s.” This derisive attitude of the author and the publication shows that it is indeed these “jholawala’s” who are preventing these businessmen, their business houses and their advertising partner’s from doing damage, thereby giving them such severe heartburn.

The article finds faults with every known source of energy - from coal to nuclear and even renewable solutions such as wind and solar!!!

At one point of time, his heart bleeds for the birds too when he writes that “Wind mills and the noise associated with them are harmful for ornithology….” Well, the effects of the mindless plunder of the rivers and damning of them leads to destruction of marine life as well to the protected species living in areas where the dams and the changed course of rivers affect their natural habitats. Again, he is completely mindless about the amount of noise, air and dust pollution caused by the construction of these projects.

His next dig is at solar when he claims that “solar panels need an army of cleaners who would have to "toil in hot sun to constantly keep them (the solar panels) clean” I do not know about the author or about the editors who proof read such articles, but anyone venturing out into India will see the millions of people toiling away in the hot sun simply to make enough to survive. When they cannot even get that after toiling and sweating, many resort to committing suicide even while the champions of industry such as Montek Singh Ahuluwallia keep reducing the amount of money to remain under the Below Poverty Line figure (inflation is incidentally in double digits). Surely cleaning solar panels is far less strenuous than ploughing, sowing and reaping crops or pulling a cycle rickshaw in the blazing sun because their fertile lands were "acquired" for some dubious project giving them a pittance in return.

The agenda of these businesses and the government is simple – change the statistics to show that poverty is eliminated even while they earn super-normal profits from plundering the poor and the natural resources of the country.

Coming to his point that Hydel power is the only viable source of “development” in the state along with tourism: The people who will benefit most by these proposed large number of Hydel projects are the project developers and the contractors for whom it is a huge profitable opportunity. It is the local people who will face all the hydrological risks due to these dams, live in fear of seismic activities such as earthquakes, land slides, rockfalls and floods in this fragile and highly earthquake-prone zone. In addition, the construction of dams renders many people homeless and landless leading to continued economic difficulties, which has been seen even in the Narmada project.

Construction of dams leads to increased heavy vehicles and machinery constantly traveling in the region, all adding to air pollution and noise pollution. The constant use by these heavy vehicles leads to road life being cut short and massive expenses in again connecting the road networks.

The fact remains that these dams would not have caused such extensive damage if there had been only a handful of them. But the sheer number of dam projects in the state - and the hundreds more that have been cleared by the state - show the immense greed of the politicians and the business houses. The constant dumping of muck and debris into the rivers is a huge problem leading to increase sedimentation rates and the accumulation of silt. In fact dams are expected to be sedimented within 25-30 years against their expected lifetime of about 50+ years.

It might be wise for the author to study the Banqiao and Shimantan Dam breaches in China in 1975 where 100,000 or more lost their lives. Extreme rainfall beyond the planned design capability of the dam caused this worst dam failure till date. In fact, even India saw such a breach in 1979 at the Bachucha dam in Gujarat in which up to an estimated 15000 people perished. This was also because of excessive rains beyond the designed carrying capacity of the water spillways, So, when he gives specious arguments stating that the Tehri saved people, perhaps he should be thankful that the Tehri dam did not breach because the rains subsided just in time. 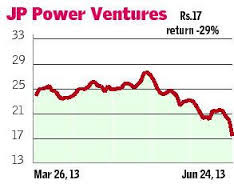 It is this attitude by well educated people who simply believe in one side of the issue and pander to the profit hungry and heartless business houses which is a condemnable attitude, bordering almost on criminal conspiracy.
The article further goes on to make ridiculous statements such as “Therefore, the jholawallahs should be banned from using known sources of production of primary electricity. They should not use secondary batteries also since they contain lead, lithium, metal hydrides and heavy metals that are likely to cause poisoning and cancer.”
This is such a hilarious and ill-informed comment that it probably was written out of frustration and not having any other facts to berate about and obviously pro-business houses once again. Solar technology has moved by leaps and bounds and has matured exponentially in the past few years. The first generation batteries and panels and cells have given way to newer technologies which are far more efficient and use very less polluting raw materials or cause huge amounts of waste. If we just talk about solar energy, then the latest available country wise installed solar capacity will surely make anyone do a rethink.
(Figures as available till end 2011, 2012 figures not officially available yet)
It is interesting to note here that the top countries in solar energy belong to regions which see snowfall and the sun does not shine as brightly as in India. In fact, a lot of these countries also have Hydel power potential; but the damage to the environment and ecosystem, the socio-economic impact on local population, the effects on the flora and fauna have made them opt for solar which is far safer and cheaper. 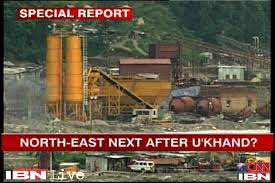 In any case, for an ecologically fragile state to depend on Hydel power for about 78% of its needs (and increasing) does not bode well for its well-being or even for its own tourism industry.  In fact most of the North Eastern states and Himachal are also falling for this lure of money with Mehayala at 84% hydel dependence and Himachal at close to 79%
It is nothing but shooting oneself in the foot if we look at the long term implications of such specious "development."
The second interesting takeaway from the above chart is not only the huge potential for solar in the bottom 3 countries and which has not happened (They are all blessed with strong sunshine and wind). This is not for any of the reasons which the suddenly bleeding heart environment and health conscious author gives us, but because of vested interests of large business houses to set up dubious coal, gas and nuclear power projects where there is extremely high earnings during construction, operations and finally even in the decommissioning and waste disposal. They would very well like to keep their businesses well-oiled in all aspects and laugh all the way to the bank.
Arguably, there is no energy source which is 100% clean. But common logic tells you that every country, every region and every state should adopt a sustainable way of living, using as little of the scarce natural resources and to make efforts not to add more to the rampant pollution and climate changes which cause such disasters.
It also does not befit a publication of such stature as the Economic Times to indulge in such propaganda – probably for their own vested business interests.


The good of the people, the country - in fact of the whole earth - should receive priority rather than resorting to such anti people and anti-national false advertising for whom humanity is subservient to their business interests.