Detailed Letter by the PMANE (Peoples Movement Against Nuclear Energy)
- S. P. Udayakumar, M. Pushparayan, M. P. Jesuraj, R. S. Mugilan, V. Rajalingam -
regarding the false and motivated cases filed against them. PMANE has been leading a long and completely non-violent struggle against the Koodankulam Nuclear power project. Their struggle has been highly appreciated for its length and non-violence all across the globe.
This is a national disgrace in a country that routinely calls itself "the world's biggest democracy." If this is how respected non-violent Gandhians are treated despite media attention, then one can imagine the situation elsewhere in India. Time to stop this national shame or to declare that India is a fascist country.

The government of India and the State government of Tamil Nadu unleashed massive police repression against these innocent protestors who want their right to safety and livelihood. A look at some of the file pictures of these atrocities. 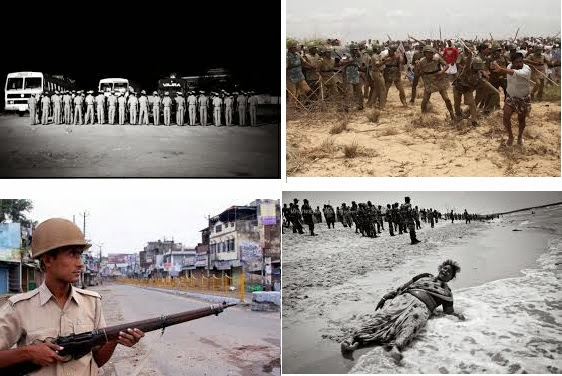 The letter written by the PMANE leaders is reproduced below:

Sub.: Requesting you to take action against Koodankulam Police Inspector and Valliyoor
DSP for their personal vendetta against us and vindictive behavior.

Greetings! We write to complain formally against Mr. I. Rajapal, Inspector of Koodankulam police station, and Mr. Stanley Jones, Valliyoor Deputy Superintendent of Police, who have been harassing us for a long time with personal enmity, vendetta and hidden agenda. These two officers have been instrumental and personally involved in filing some 340 criminal cases against us and a total of some 2,27,000 peaceful and nonviolent anti-Koodankulam nuclear power project protestors.

On March 21, 2012 at around 9 pm, when Mr. R. S. Mugilan was produced in the Valliyoor Court by police, Mr. Rajapal had threatened him not to report any of the harassment and physical assault he had suffered at the hands of police to the Judge. Mr. Rajapal even warned menacingly: “If you say anything, I will get rid of you.” When Mr. Mugilan reported it to the Judge, the angry Mr. Rajapal beat him up when Mr. Mugilan got out of the Court shouting, “I won’t let you go alive when you come out of the prison.” Mr. Mugilan filed a detailed complaint with all of this information to the State Human Rights Commission on March 16, 2013 (Case No. 2116/2013). We have documentary evidence for all this.

On May 11, 2012 one of our Struggle Committee members, Mr. V. Rajalingam from Koodankulam, was badly beaten up and verbally abused at 5:15 PM near the East Bazaar of Koodankulam by Mr. Stanley Jones and Mr. Rajapal. Both Mr. Rajalingam and one Mr. R. K. Selvakumar who witnessed this brutal attack submitted written and signed depositions at the Public Hearing conducted on May 14, 2012 in Chennai by the Chennai Solidarity Group for the Koodankulam Struggle. Mr. Rajalingam also complained to the National Human Rights Commission about this brutal attack.

On May 29, 2013, one Mr. Prathap (s/o Martin, aged 22) filed a complaint at the Koodankulam police station against Vimal (s/o Peter), Kishok (s/o Peter), Infant (s/o Selvan) and Dhoni (s/o Thomas) for a personal scuffle. But Mr. Rajapal and Mr. Stanley Jones included the names of us in the case as usual; but the complainant gave interviews to the media that he had not mentioned our names in the petition at all. We also formally complained to you, the IG (South Zone), the DIG (Tirunelveli) and the SP (Tirunelveli) through registered letters dated June 4, 2013 about the reckless behavior of these two officers. We have documentary evidence for all this.

On July 29, 2013 Mr. Rajapal and Mr. Stanley Jones filed another ridiculously false case that Rev. Fr. M. P. Jesuraj, who had been living at Idinthakarai, hurled country bombs at Koothenkuzhi village along with some 18 men from Koothenkuzhi village.

On August 24, 2013 at 10:30 pm, some five bombs exploded outside the Parish Priest's bungalow and near the Tsunami Colony of Idinthakarai. At 12:30 am, three eye witnesses, Ms. Mary (w/o Sebastian, age 75), Ms. Amali (w/o Nasren, age 70) and Ms. Lilly Pushpam (w/o Clement, age 58), who had seen Sahaya Kapoor (s/o Siluvai Anthony, age 35), Socrates aka Mutti (s/o Siluvai Anthony, age 36), Lawrence (s/o Siluvai Anthony, age 38) and Sathip (s/o Bernard, age 22) throw the bombs, went to the Koodankulam police station by car to file a complaint. We also sent our complaint to the CM Cell, the DGP and other officials through email. The Sub-Inspector, Mr. Thirumurugan, told them that he had to consult with his higher officials and asked them to come back in the morning at 9 am. He did not even give a receipt for the petition. But on August 25, 2013 at 1:30 am, Mr. Thirumurugan filed an FIR holding 65 of us (15 named accused including S.P. Udayakumar, M. Pushparayan, M. P. Jesuraj, R. S. Mugilan, V. Rajalingam, Peter Milton, K. Kebiston and 50 unnamed accused) under four serious sections such as 147, 148, 294 (b), 307 r/w Sec. 3, 4 of ES Act 1908 at the instigation of the Koodankulam Inspector Mr. I. Rajapal and the Vallioor DSP Mr. Stanley Jones. Ironically enough, the petitioner is the same Kapoor who had hurled the bombs.

On September 19, 2013, two families here at Idinthakarai had a physical fight around 9:00 pm because of some previous enmity. When a few people were injured, the aggrieved party, Mr. Elango (s/o Santacruz) and Brighton (s/o Rosari) complained to the Koodankulam police the same night. But the Koodankulam Inspector Mr. I. Rajapal and the Vallioor DSP Mr. Stanley Jones filed FIRs (238/13 and 239/13) against the 19 people mentioned in the petition and included the three of us, S.P. Udayakumar, M. Pushparayan and M. P. Jesuraj for completely unknown reasons. We had nothing to do with the family feud whatsoever and the complainants have confessed that they had not even mentioned our names in their complaints or depositions.

The Honorable Supreme Court in its May 6, 2013 verdict in the G. Sundarrajan vs. Union of India case (on the Koodankulam nuclear power project) offered, among others, the following recommendation: “Endeavour should be made to withdraw all the criminal cases filed against the agitators so that peace and normalcy be restored at Kudankulam and nearby places and steps should be taken to educate the people of the necessity of the plant which is in the largest interest of the nation particularly the State of Tamil Nadu.” Later the Honorable Madras High Court also recommended withdrawing all the cases against us in their July 29, 2013 verdict. But the Government of Tamil Nadu has not taken any effort to withdraw the above cases against the nonviolent and peaceful protestors of the Koodankulam agitation. Instead, the Koodankulam Inspector Mr. I. Rajapal and the Vallioor DSP Mr. Stanley Jones, have been filing more and more private criminal cases to keep us all under their clutches and to harass us.

Mr. Rajapal has been colluding with the Nuclear Power Corporation of India Ltd, enjoying several privileges at their Anuvijay Township at Chettikulam including free housing, free food and other special conveniences for his loyal anti-people services. He is said to be constructing a big house at Valliyoor with items donated by the NPCIL contractors and subcontractors and unaccounted money from unknown sources. Similarly, Mr. Stanley Jones has been accused of hunting wild life for a long time and several news magazines have reported this anti-social activity. Both of them are being protected by higher officials for unknown reasons. These two officials should be probed for their illegitimate NPCIL connections and disproportionate wealth accumulation.

These two officers are also known locally for their casteist and communal fervor and hateful behavior. They have been openly and publicly invoking people’s caste and religious identities to divide and harass them. They have been behaving unprofessionally, unethically and recklessly against us and the other anti-Koodankulam protestors as well. We are afraid that these two officers are behaving partially in favor of the NPCIL and hatching a major conspiracy with anti-social elements and the KKNPP officials to hurt us and our people. We are getting worried about our physical safety and security.

Please institute an inquiry into the unprofessional and prejudiced behavior of Mr. I. Rajapal, Inspector of Koodankulam police station, and Mr. Stanley Jones, Valliyoor Deputy Superintendent of Police, and take disciplinary action against them before these two officers lose control of themselves completely and hurt or harm or kill us.

Thanking you in anticipation, we send you our best regards and all peaceful wishes.