The Prime Minister of India trots around the globe and proudly signs contracts for uranium supplies to India He himself visits or calls upon delegations from various continents and nations like Australia, Canada, France, USA, Kazakhstan etc. to discuss uranium related issues. Sadly, he is turning a blind eye to illegalities and gross human rights violations happening right under his nose and in his own country.

Is it because the original landowners (the adivasis) are less human than white skinned foreigners? 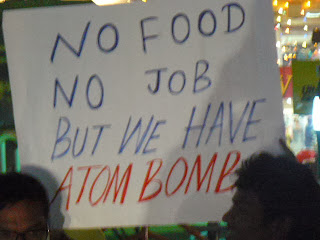 The atrocities perpetuated by the Uranium Corporation of India (UCIL) management against hapless and displaced indigenous people in Jharkhand continue unabated.
Behaving in a roughshod manner, mindless of any concept of natural justice and is behaving in a completely illegal manner with the people around the mining areas which is tantamount to Human Rights violations and the Acts on Atrocities against Adivasis.

After acquiring land and causing untold havoc with the lives, medical and social fabric of locals since 1960’s in Jadugoda, UCIL trained its eyes on the Turamdi mines area which is about 20kms away from Jadugoda and a mere 5kms from the bustling industrial city of Jamshedpur (Tatanagar).
UCIL acquired vast stretches of land for building the Turamdi and Bandohurang mines besides building a huge tailing pond, a milling and a uranium processing plant since the 1990’s

Gross irregularities have occurred during the land acquisition process. Many adivasis (indigenous) people are still not adequately compensated nor have they received the promised “permanent” jobs at UCIL. In fact, people who did not belong to the Project Affected People (PAP) category have got jobs reserved for these PAP families.


At the Turamdi mines, there was an original promise of hundreds of permanent jobs mentioned in the Environmental Impact Assessment (EIA) and Detailed Project report. However, only a few permanent jobs were created when the mines were operationalized and the balance jobs were offered on a contract basis to the displaced people.

After going through two changes in the contracts lasting over the last eight odd years, now these experienced contract workers are being rendered jobless by UCIL which has negotiated a new contract with another company from Gujarat. The new contractor claims that it will neither hire the original workers nor will it need as many workers as were hired before.

To add insult to injury, now,UCIL is offering these contractual jobs to people who have no experience of working in uranium mines nor do these people belong to the project affected areas thereby causing one to wonder if UCIL is working in the interests of the contractors rather than the workers. Hiving off complete mining activities to an outsourced contractor – especially in hazardous industries – is also tantamount to negligence and an open invitation to potential disaster.

The contract workers have been made to work for years in core production areas of the mining business and to summarily discharge from duty is against the labor laws of the country. Prima facie, these workers are eligible for permanent job status with ALL attendant facilities. Now they are being thrown out of their only source of livelihood.

Ever since news of job losses was conveyed to the contract workers earlier this year, they have been on a silent sit-in demonstration at the mines and have been trying to negotiate with the UCIL management and the newly appointed contractor.None of their pleas have been heard by either party who have adamantly stuck to their stand of not allowing the earlier workers back to work.


Upon seeing that their jobs were being offered to people having no relationship with any PAP (some even hail from neighbouring states) the desperate and aggrieved workers approached for help from the district administration, labour office. They even met the Jharkhand Chief Minister Hemant Soren a few days back who asked his officers to intervene in this matter for an early and amicable solution. Even this did not move the District Collector who maintained that this is an issue between UCIL management and the workers and he would not intervene!

Left to fend for themselves and nobody to listen to their pleas, the workers then moved their agitation to the gates of the project and continued their peaceful and silent sit-in protest. Perhaps as retribution to their actions, the UCIL summarily dismissed a few permanent workers from its staff on vague charges creating complete unrest at the mining site. If the UCIL management imagined that dismissing its permanent workers would create a rift between them and the contract workers, it was grossly mistake. It in fact, brought them together to fight for the legitimate rights of the workers.

But the workers were not prepared for the sudden and brutal police action against them on the morning of November 21st 2013 when police at the behest of the state administration/UCIL management began to beat them up with lathis (batons) in the process injuring 5 workers so grievously that they had to be hospitalized.

The local workers in association with JMACC (Jharkhand Mines Area Coordination Committee) held a protest march on the same day in the capital city of Ranchi. With no respite from any quarters, the workers have now started an indefinite fast outside the Jharkhand Governors official residence in the hope that they will finally get back their jobs and livelihood.


The Government of India, the Prime Minister’s Office (to which UCIL reports) the State & District administration, local police and of course, the top management at UCIL are all equally culpable for this injustice perpetrated on the adivasis who are already dying a slow death due to the radiation from the mining activities. 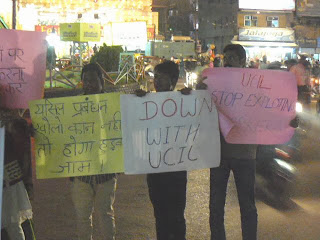 You can also read my earlier article “A Nightmare Called Jadugoda” at:
http://www.dianuke.org/a-nightmare-called-jaduguda/