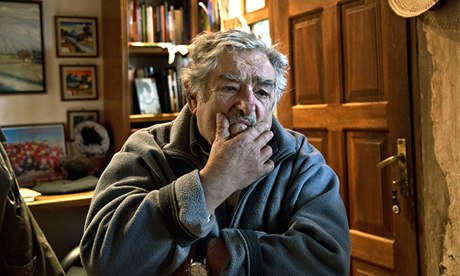 1969 Active in the Tupamaros revolutionary group, which earned a reputation as the "Robin Hood guerrillas" by robbing delivery trucks and banks and distributing the food and money among the poor.
1970 Arrested for the first of four times. Mujica escapes Punta Carretas prison in a daring jailbreak. Shot and wounded numerous times in conflicts with security forces.
1972 Imprisoned again. Remains in jail for more than a decade, including two years' solitary confinement at the bottom of a well, where he speaks to frogs and insects to maintain his sanity.
1985 Constitutional democracy is restored in Uruguay and Mujica is released under an amnesty law.
1994 Elected deputy and arrives at the parliament building on a Vespa scooter. A surprised parking attendant asks: "Are you going to be here long?" Mujica replies: "I certainly hope so."
2009 Wins presidential election. Only words to the media that day: "Despite all this lip service, the world is not going to change." Adopts a ruling style closer to centre-left administrations of Lula in Brazil and Bachelet in Chile, rather than harder-left leaders such as Hugo Chávez.
2012 Lauded for a speech at the UN's Rio+20 global sustainability conference in which he calls for a fight against the hyper-consumption that is destroying the environment. "The cause is the model of civilization that we have created. And the thing we have to re-examine is our way of life."
2012 Announces that the presidential palace would be included among the state shelters for the homeless. Meanwhile, Mujica continues to live in his small farmhouse outside Montevideo.
2013 Mujica's government pushes the world's most progressive cannabis legalisation bill through Congress. "This is not about being free and open. It's a logical step. We want to take users away from clandestine business," he says.
Courtesy: http://www.theguardian.com/world/2013/dec/13/uruguay-president-jose-mujica